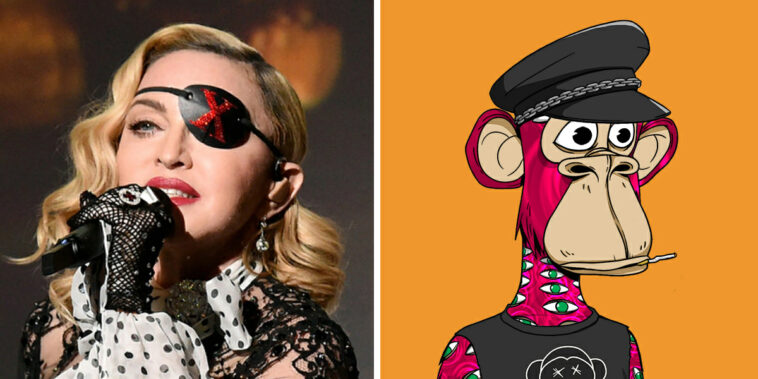 Madonna revealed on Instagram on March 24th that she had purchased Bored Ape #4988...

Madonna revealed on Instagram on March 24th that she had purchased Bored Ape #4988.

Madonna told her 17.8 million Instagram followers that with her BAYC purchase, she had "finally entered the metaverse." She also requested suggestions for a name for Bored Ape #4988. Madonna also expressed gratitude to the fiat-to-crypto platform MoonPay for assisting her in obtaining this valuable NFT.

For quite some time, there have been rumors that Madonna was planning to join the Bored Ape Yacht Club. Lindsey Byrnes, a BAYC member, tweeted the image of Bored Ape #3756 on January 3rd, suggesting it would be an ideal fit for Madonna's Web3 avatar. Fourteen days later, Madonna responded by writing that she liked Byrnes' choice and asked how she should proceed.

Interestingly, Madonna's manager Guy Oseary has officially announced that he is representing Yuga Labs, the founder of the Bored Ape Yacht Club. In addition to the BAYC, Oseary has collaborated with other notable NFT collections such as the World of Women (WoW).

Madonna isn't the first celebrity to use MoonPay to add a Bored Ape to her collection. Rappers such as Snoop Dogg and Lil Baby have used MoonPay to purchase BAYC NFTs.