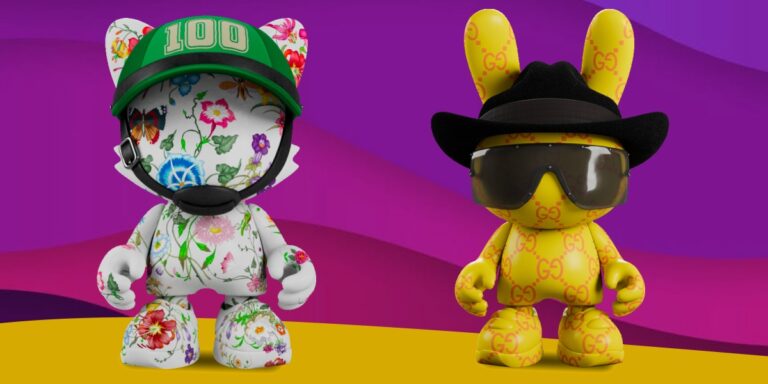 Gucci and Superplastic Drop the Final Installment of SUPERGUCCI NFTs

This past Sunday, Superplastic and Gucci released a companion Guggimon NFT that comes with a ceramic object manufactured in Superplastic's Italian factory as the last surprise for collectors of SUPERGUCCI's Janky NFT.

Alessandro Michele, the creative director of Gucci, and the digital artists Janky & Guggimon of Superplastic worked together to create the NFT collection, which was unveiled in February as a two-part series of limited NFTs.

Thank you @opensea for featuring the #SUPERGUCCI airdrop on the homepage 🙌 pic.twitter.com/lKjFa9Q18w

The new Gucci Love Parade-inspired Guggimon NFT, which completes the set of the virtual duo, will only be given to owners of the SUPERGUCCI Janky NFT, which was launched in the first drop. Considering that there are only 500 NFTs minted for each drop, people who wish to acquire the Guggimon NFT will have to place a bid on the secondary market.

Superplastic's Janky and Guggimon NFTs have generated over $20 million in total sales over the last year, with SUPERGUCCI's current floor price of 1.15 ETH on OpenSea, around $2,200 at the time of publication.

“Our celebrity characters have tens of millions of fans and followers around the world and to partner with Gucci, one of the most identifiable brands on the planet, was an exciting collaboration for both of us,” said Paul Budnitz, CEO and Founder of SUPERPLASTIC.

Gucci's partnership with Superplastic marked Gucci’s initial entry into Web3, which led to the fashion house accepting cryptocurrencies at its physical stores and collaborating with NFT marketplace SuperRare on a curated digital art collection.

Gucci's initial entry into Web3 was the SUPERGUCCI partnership, which led to the fashion house accepting cryptocurrencies at its physical outlets and collaborating with NFT marketplace SuperRare on a curated digital art collection.

The final SUPERGUCCI NFT drop is undoubtedly fantastic news for Janky NFT investors and demonstrates Gucci's persistence in the industry despite the current market downturn.