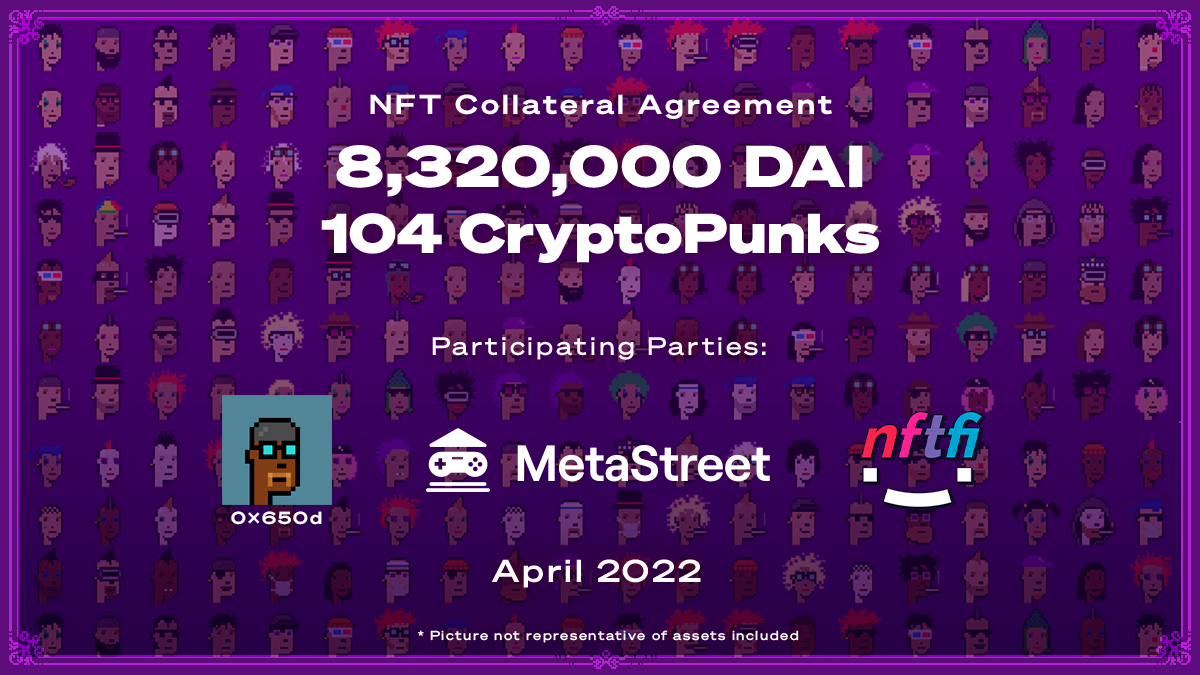 Owner of 104 CryptoPunks Closed an $8.3M Loan Agreement on the Lot‍

The anonymous consignor who pulled his 104 CryptoPunk NFTs lot from Sotheby's in February has taken out an $8.32 million loan on his lot...

The anonymous consignor who pulled his 104 CryptoPunk NFTs lot from Sotheby's in February has taken out an $8.32 million loan secured by the same blockchain-based collectibles.

In February, Sotheby's was set to auction off a collection of 104 high-value CryptoPunks NFTs, with an estimated worth of $20 million to $30 million. Instead, the Ethereum NFTs' owner withdrew the lot minutes before the auction began, bragging on Twitter about "rugging" Sotheby's.

Instead, 0x650d, the anonymous owner of those NFTs, has taken out an $8.3 million loan with the CryptoPunks as collateral, making it the largest such loan to date.

The 104 CryptoPunks owner who canceled Sotheby’s auction gets an $8.32 million NFT-backed loan

The loan on April 1 exceeds one acquired in early March with a separate bundle of 101 CryptoPunks from a different holder. On both occasions, the loans were made through NFTfi, an NFT-backed lending marketplace, with MetaStreet, a liquidity-providing DAO (or decentralized autonomous organization), providing the funds.

“Thanks to the chads [at MetaStreet] for unlocking 8.32m in liquidity on my CryptoPunks while allowing me to retain upside exposure to my collection,” 0x650d tweeted. ‍‍

Thanks to the chads @metastreetxyz for unlocking 8.32m in liquidity on my CryptoPunks while allowing me to retain upside exposure to my collection 🔥🔥 https://t.co/r6QIdOP3Q4

According to details released by NFTfi, 0x650d would borrow 8.32 million DAI stablecoin with a 90-day payback window and a 10% APR. It's the most prominent example yet of a growing trend among NFT collectors to tap their precious assets to release short-term liquidity rather than sell the NFT for a one-time reward.

As the value of the NFT market skyrocketed last year, several owners of "blue chip" NFT collections looked for ways to profit from their highly valuable assets in the near term. NFTfi, a peer-to-peer marketplace that connects NFT owners with liquidity providers who can make loans in Wrapped Ethereum ($WETH) or $DAI, fills this gap. Arcade and Drops are two other NFT-backed lending platforms.